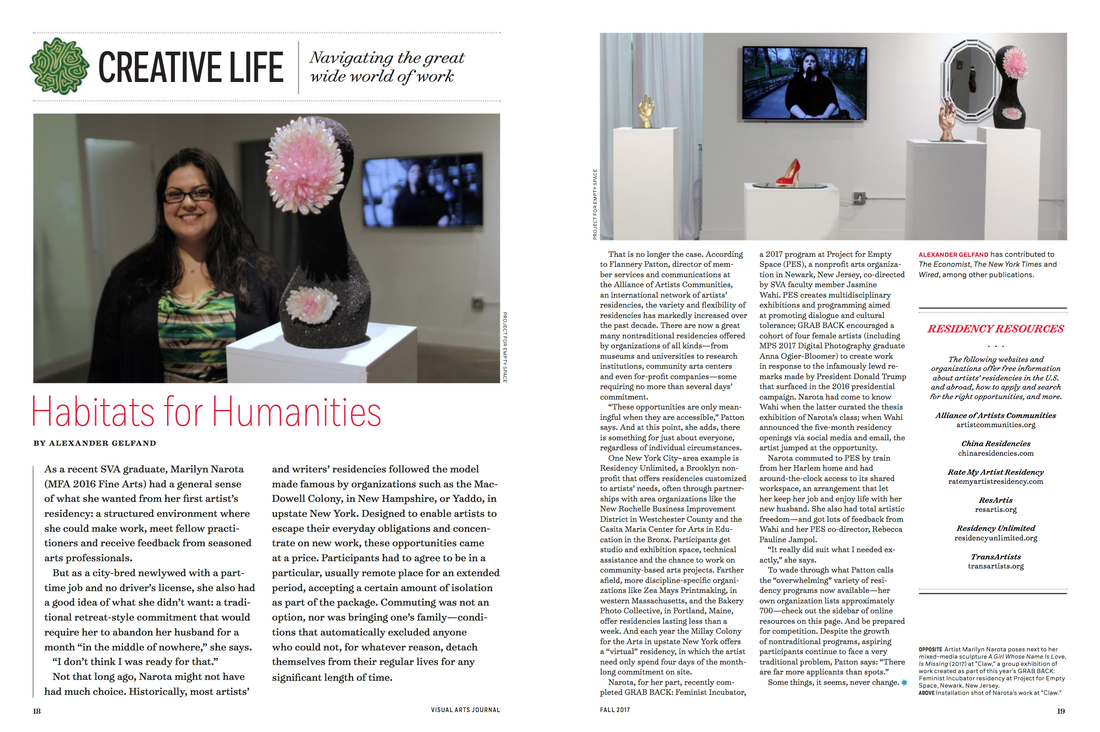 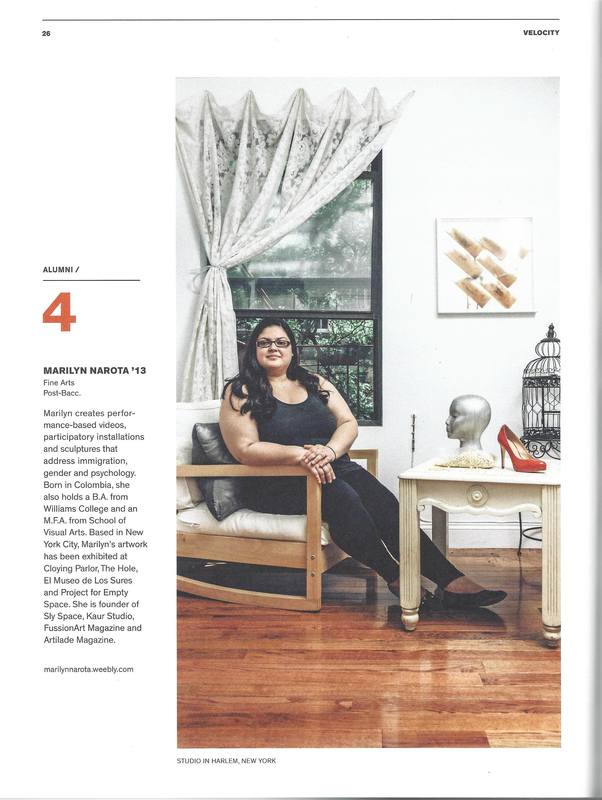 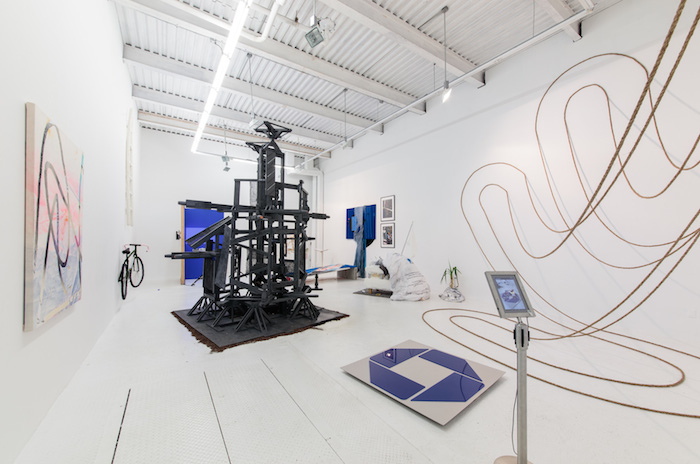 Any MFA thesis show provides a glimpse into the concerns of a new generation of artists. Second-year fine arts students at the School of Visual Arts recently mounted the group exhibition, Popular Culture Is Where The Pedagogy Is, featuring a set of emerging artists who are actively thinking about the pervasive politics and power dynamics present in American pop culture. The 29 artists, who were on display through June 5, used painting, sculpture, performance, and installation to explore observational aesthetics, active engagement, and new takes on formalism, via identity politics.

“The concept that popular culture informs everything is particularly relevant within the discourse around art making,” explains the show’s curator and SVA professor, Jasmine Wahi, to The Creators Project. “This exhibition deals with various types of sociopolitical and art histories.” Wahi pulled the show’s title from scholar bell hooks’ interview, “Cultural Criticism and Transformation.” The curator says, “Whether the work is responding to a moment in social history, contemporary circumstance, or aesthetic formalism, they are all pulling from a very human and very specific set of cultural prompts.” She adds, “The idea is more prosaic than it is prolific—we make culture and culture makes us.”

Delano Dunn's mixed-media painting, Weary: A Morning Song 2015, features Ruby Bridges, and hints at social history and racial identity. “My work explores the previously overlooked simultaneity of the 60s American space race and the Civil Rights Movement,” writes Dunn in the exhibition catalog. Dunn’s works, which combines imagery of astronauts and other civil rights activists as a way to confer superhero status onto black Americans, is grouped in the show’s observational aesthetics art section. Ali Shrago-Spechler's installation, A whole new megillah does amerikuh, 2016, insists that the audience interacts with large-scale Donald Trump piñatas and Bernie Sanders masks as active engagement art represents. According to the artist, “hybrid actions force viewers to question their own narratives, self-imposed alienation, and the source and effect of memory.”
Ruth Freeman's Is That The Way You Paint?, 2016, explores how traditional concerns over how color, materiality, shape, and the very idea of traditional painting are being renegotiated as they converge with digital painting. “My paintings play upon these ideas and glitches, utilizing the same physically obsessive processes of perfection and detail that parallel the digital functions we use daily,” Freeman explains in her thesis statement. The politics in Freeman’s paintings reside within her formal aesthetics.

The exhibition presented both artistic and political freedom. It was, in general, much more overtly political than most shows in and around New York City. “As a curator, I think that MFA programs are meant to push artists socially, mentally, and conceptually. And, they should push students to embrace that intellectual, political, and social freedom,” Wahi says. “The SVA MFA Fine Arts Department does a really great job in encouraging students political, social, interdisciplinary, and intersectional explorations.”
“One of the realities of the art industry, particularly with respect to commercial galleries and larger institutions, is that there is an underlying component of commerce and what may appeal to buyers,” states Wahi. “This is not to say that artists aren't creating political work that isn't commercially successful. However, I don't think it's necessarily encouraged in the same way that it is in a more 'experimental' environment.” She says, “Collectors and boards do have a lot of influence in what is shown in these types of spaces, and the truth is that many people in these positions are not avidly interested in a political discourse in a visual arts space. It's not a criticism, just a reality.”

Ali Shrago-­Spechler, A whole new megillah does amerikuh 2016, Mixed Media Dimensions Variable. All images courtesy of SVA.
For Wahi, the artists in the show represent a generational shift. “The next generation of strong artists are multidimensional, multidisciplinary, and very multitalented,” she explains. “The bounds of an artist being strictly a formalist painter, or a feminist sculptor are rapidly evaporating.” She adds, “Basically, I'm saying the next generation is going to make us think. So get ready.”
Popular Culture Is Where The Pedagogy was on view through June 5 at The Hole. Click here, for more information.
​Link: http://www.notey.com/@thecreatorsproject_unofficial/external/9758389/art-school-exhibition-explores-the-politics-of-pop-culture.html 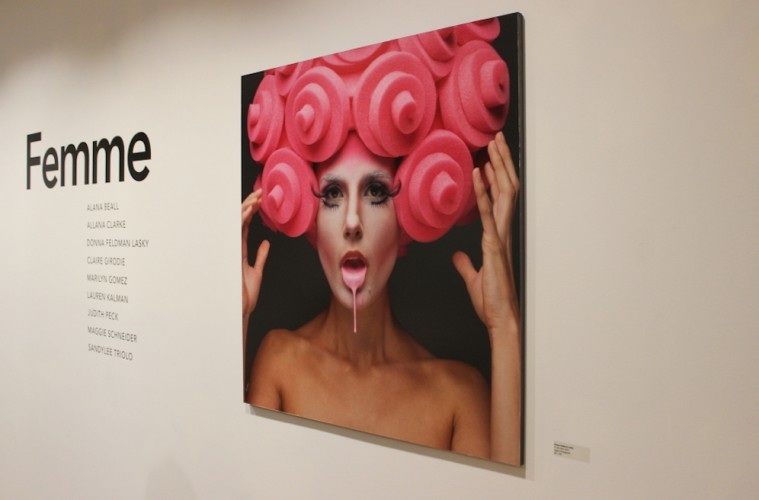 We Saw This, So Should You: Femme and Joe Hyde’s Certain Trees at Goucher College

An account of two thought-provoking and visually enticing exhibits in Goucher College’s Rosenberg and Silber Galleries by Joan CoxIn the Silber Gallery, a group exhibit curated by gallery director Laura Amussen, titled Femme, features nine artists.
The reception was crowded and full of energy—an energy that was amplified by Maggie Schneider’s live performance piece, Narcissus. Self. Portrait. The artist posed in front of a life-sized mirror—completely entranced with her own reflection—occasionally primping and adjusting her pose for the duration of the reception. A string of white lights were arranged in a circumference on the floor around her to keep gallery-goers from interrupting her performance. In addition, the lights wrapped around the mirror to give Schneider an aura of fame and celebrity.The center of the gallery is activated by Sandylee Triolo’s video installation, W.F.E.M, that consists of two orange arm chairs, a side table, a green shag carpet and a floor-model tv circa 1960 playing video footage of movies, advertisements and idealized images of women from the past 50 years of media.

The rear wall of the gallery is painted entirely black. The center of the wall juts forward into the gallery space and has a circular cutout revealing a video screen. Closer inspection reveals an enlarged close up of male genitalia. Based on the idea of Courbet’s Origin of the Universe, artist Allana Clarke puts the male body on display for the pleasure of the female gaze. Clarke’s piece, The Black Box Usurps the White Cube Usurps the Black Box, grabs your attention from the other side of the gallery due to the encompassing black wall and the sheer nudity, but it is the scale of the piece that can’t be ignored. At least five times life-size, the shock value overcomes the intimacy it could have provided for a viewer. Allana Clarke and Lauren Kalman also have video works near the entrance to the exhibit that demand your attention— each has imagery that is a bit uncomfortable to watch.

The diversity of works in Femme ranging from the beautiful to the grotesque is tremendous: there are intimate paintings by Claire Girodie, and Judith Peck, beautiful and intriguing photographs by Alana Beall and Donna Feldman Lasky and understated, but still surprising, mixed media works by Marilyn Gomez.
Maggie Schneider will be present in the gallery once per week to perform Narcissus. Self. Portrait. from 2pm – 4pm on Friday, February 21st; Saturday, March 1st; and Friday, March 7th. Femme is on display February 4th through March 9th, 2014. The art can be viewed Tuesday through Sunday from 11 a.m. to 4 p.m. Please visit www.goucher.edu/silber for more information.

While you are on the Goucher campus, don’t miss Joseph Hyde’s solo exhibition, Certain Trees, in the Rosenberg Gallery. His haunting black and white photographs of trees are evocative of human forms.
In his fine art practice, Hyde photographs trees obsessively. Within their gnarled and out stretched limbs he finds sentient and gestural qualities. Wrought with these familiar humanlike characteristics, Hyde’s photos draw the viewer in and offer a quiet place for contemplation. Recently, while visiting La Push, Washington he found primal elements of nature in pristine condition; big water, big rocks, big wood, and heavy, restless skies. Working in tandem with his surroundings, Hyde’s most recent compositions beautifully capture various aspects of unspoiled landscapes, weathered branches, and protruding land masses.

Certain Trees, is on display January 11th through March 2nd, 2014. This exhibit, which is free and open to the public, can be viewed Monday through Friday from 9 a.m. to 5 p.m. Please visit www.goucher.edu/rosenberg for more information.
* Author and photographer Joan Cox is a Baltimore-based painter and a graduate of the MFA program at MassArts.
Link: http://bmoreart.com/2014/02/we-saw-this-so-should-you-femme-and-joe-hydes-certain-trees-at-goucher-college.html